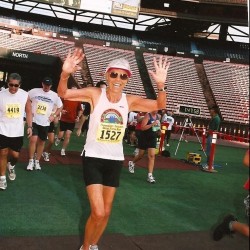 Ruth Heidrich
Ruth Heidrich, Ph.D., is the winner of more than 900 trophies, including 8 Gold Medals in the U.S.Senior Olympics. Named one of the Ten Fittest Women in North America, she is a breast cancer survivor and author of A Race for Life, Senior Fitness, & The CHEF Cook/Rawbook.

“And in first place overall,..” the announcer’s voice boomed over the PA system at the finish of the Senior Olympics triathlon.  I heard my name and excitedly ran up to the stage to collect my gold medal. As I stood on the stage, I choked back tears, overwhelmed by just how far I had come — from breast cancer to the winner in a triathlon!

It was such a contrast from another day when I heard my name called, only this time it was in a doctor’s office to receive the results of a biopsy of a lump in my breast. I just knew it couldn’t be cancer because, after all, I was the fittest, healthiest person I knew. Although I was then 47, I was running marathons and had been a daily runner for 14 years. Lean and fit, I’d given up red meat, eating only what I thought then was a very healthy diet.

When I heard the words, “Infiltrating Ductal Carcinoma,” a wild panic seized me. I wanted to scream, “No, wait a minute; wait just a darn minute — I can’t have cancer! I’m a marathoner, for Pete’s sake!” The doctor showed me the pathology report, and then a sinking feeling came over me; my knees got weak, and my head started swimming. I could barely hear the doctor’s words, something about more surgery, then chemo, then radiation, then more tests.

Then I thought back even further — to high school days back in the 1950s when I took up swimming and diving as my sport. Since I was the only female on the team, I was, by definition, the “best,” which I needed to hear because I was also usually the “last” in racing with the boys. From there, I entered the State Diving Championships and won a gold medal. My dreams went soaring! I was going to enter the Olympics and be an Olympic Champion!

After graduating from high school and getting started in college, I found that there was little time to train between my studies and the full-time job required to pay my way through college. Then I decided that, after all, all kids have unattainable dreams of being a champion athlete, a movie star or president. But, day-to-day working and studying are usually the stark reality! My dream slowly faded over the years into a vague, distant past.

In 1968, while walking past a bookstand, I saw a book title, “Aerobics,” by Kenneth Cooper, MD. “Aerobics,” I thought to myself, turning the word over in my mind. I wondered what it meant since I’d never seen it before, not surprising since Dr. Cooper had just coined the term. Thumbing through the book, I saw that running as an exercise had many benefits. In fact, for every ailment I had, it seemed that running was the answer, from head to toe, insomnia to flat feet!

I bought the book, devouring it in one sitting since I couldn’t put it down, and fell asleep determined to start a running program. To my surprise, I woke up at 5 am, an hour earlier than my usual wake-up time. Jumping out of bed, I scrambled through my closet, found my old tennis shoes, a pair of shorts, and an old t-shirt. Out the front door and down the street, it felt bizarre. I was thankful that nobody in the neighborhood was yet awake because I certainly would have been embarrassed!

I continued down to the end of my street, a half-mile away. Since I was then only 33, there hadn’t been too much deterioration of my body. I was feeling pretty smug as I turned back, thinking that if I ran all the way home, I would have run a whole mile! When I got back, I jumped in the swimming pool, swam a couple of laps, and then rushed to get to work. I felt so energized and fit and strong that I decided to do this routine every morning — which I did!

One day, after having gone through this routine for several years except now I was extending the turnaround point as I got stronger, someone mentioned a race coming up, a 3-mile “Turkey Trot.” I thought that might be fun; plus, I was anxious to see how I’d do after nearly five years of running.

As I toed the start line, I looked around and saw nothing but guys. “Wow,” I thought, “I’m the only female here — just like the high school swim team.” This was 1973 when road racing was just getting started with very few men and even fewer women. Since all I had to do was finish, I came home with a gold medal, an automatic first place having no competition. I was pretty excited about my new road-racing career and trained to go further and faster. Later as women started to enter, there were age divisions, and as I got older, I was still winning and racking up gold medals.

The diagnosis of breast cancer just didn’t fit, and yet, there it was. Then I learned two things that turned my life around. First, animal foods increase your risk for cancer, and, second, cancer cells thrive in an anaerobic (no oxygen) environment. But, wait just a minute, running was aerobic, so it had to have been the diet that led to my cancer. Working with John McDougall, MD, who was at that time doing research that linked animal foods and oils to breast cancer, I changed to a low-fat vegan diet. Also, at that time, I saw the 1982 Ironman Triathlon on TV and decided that just in case running wasn’t aerobic enough. I started swimming again and added cycling to be really sure. And to give me a goal, I sent in my application to do the Ironman. Never mind that no woman this old had ever completed one, never mind that I was now a cancer patient. As I trained and got stronger, my goal of becoming an Ironman became a reality, and I’ve now done the Ironman six times. I’d never been this fit in my whole life, and here I was now in my 50s!

Then in 1996, a friend said, “Why don’t you enter the Senior Olympics?” At that point, my old dream of the Olympics came rushing to the forefront. That old surge of excitement and challenge was almost palpable. I checked and found the next Senior Olympics was in Las Vegas. I sent in my application, got plane reservations, and doubled my training.

Once in Vegas, I checked the venue of the triathlon course. It was in an area with street names that meant nothing, but I figured that I didn’t need to worry about the bike/run course because I would just follow the person in front. But — to my great surprise and shock — I was the first out of the pool and first on the course. There was no one to follow! I nearly panicked as I thought, “Here I am in the first place, and I’m going to blow it by getting lost.” I steadied myself and came up with a strategy: “When in doubt, go straight.” My heart settled down, but the anxiety was almost unbearable as I pedaled as fast as I could. I kept waiting for a sign that I was on the right course or that someone would overtake me and I’d lose first place. I also thought what a tremendous coup to beat all the men, so I wasn’t about to slow down.

Finally — finally! I saw a course marshal with a sign pointing a right turn. What a relief! But the relief was short-lived — just a minute later, the anxiety hit all over again. Where do I go from here? “Settle down, lady. Remember, when in doubt, go straight.” That strategy got me through both the bike and run course, and, unbelievably, to me, I crossed the finish line first overall!

Standing on that stage, I thought about how far-fetched the whole drama was, that here I was 61 years of age, and I’d just won an Olympic gold medal. That taught me never to give up your dreams, even if they are Olympic dreams — Senior Olympic Dreams!

Ruth Heidrich, Ph.D., is an author, speaker, nutritionist, and the Speaker Coordinator for the Vegetarian Society of Hawaii. She lives in Honolulu, Hawaii where she trains in running, biking, and swimming all year round. She’s won nearly 1,000 gold medals and was named one of the Ten Fittest Women in North America by Living Fit Magazine. Her first book, A Race For Life, details her struggle to beat the fast metastasizing cancer; CHEF, a recipe ebook; Senior Fitness; Lifelong Running, and “How to Prevent/Cure ED: Ten Steps to Sexual Fitness. Check out her website, www.ruthheidrich.com, and www.lanternbooks.com.